Bigg Boss 13 finalist Asim Riaz and Punjabi singer and actor Himanshi Khrana celebrated Eid together. The duo has been dating since Bigg Boss and is often seen sharing pictures for their AsiManshi fans. On Friday, Asim took to his Instagram stories to share pictures from his Eid-ul-Fitr celebrations which included his brother Umar Riaz and girlfriend Himanshi. The pictures went viral in no time. The duo celebrated Eid in jammu with Asim’s family.

In the photo, Asim and Himanshi can be seen posing for the camera and flashing their infectious smiles. Asim wrote, “Eid Mubarak.” Himanshi also took to Instagram to share pictures and videos from the celebration. The actress can be seen dressed in a beautiful dark green outfit. She also wished her fans Eid Mubarak.

Check out the pictures here- 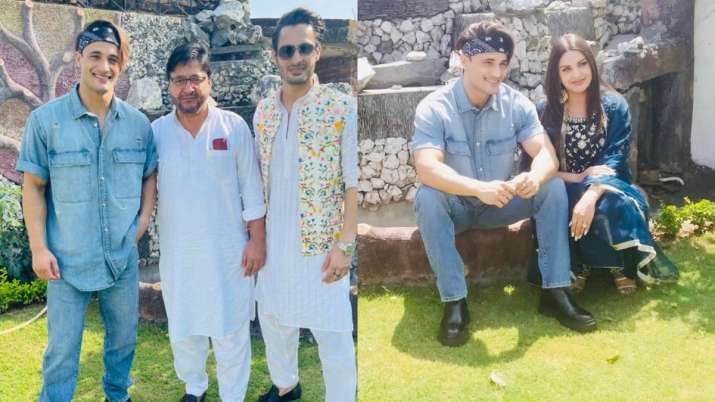 On the occasion of Eid, Asim dropped his debut track as a rapper. Titled “Back to start”, Asim has written his debut song besides singing it. The rap number depicts his days of struggle, right from the start of his career and is released under Sony Music India. Asim says he had the number with him since 2015 and wanted to polish it before putting it out there for listeners.

Soon after he posted the update on social media, actor Varun Dhawan who has worked with Asim Main Tera Hero took to the comment section to laud him for the song. “Tune. You’re achieving everything you set out to do,” wrote Dhawan on Asim’s Instagram post.

“We take a look around us and we see that everything is changing and so much of the good change is being embraced. I had ‘Back to start’ with me since 2015 and I wanted to polish it till I was ready to put it out there for the listeners,” IANS quoted him as saying.

“I’m very pumped that its release. My wish for everybody this Eid is to have the strength to embrace changes and hustle their way forward,” Asim added.

On a related note, Asim Riaz and Himanshi Khurana met each other in the Bigg Boss 13 house. However, during that time Himashi was already in a committed relationship. When Himanshi Khurana got evicted from the house, Asim Riaz confessed his feeling for her. Later, Himanshi ended her relationship with ex-beau and was seen entering Bigg Boss 13 house once again as Asim Riaz’s connection. Asim went down on his knees to propose to Himanshi and later introduced her to his family on the grand finale of Bigg Boss 13.

The duo have been seen together in many music videos after BB including “Afsos Karoge”, Arijit Singh song “Dil ko maine di kasam” and Neha Kakkar’s “Kalla sohna nai”.