Saif Ali Khan, Arjun Kapoor, Yami Gautam and Jacqueline Fernandez‘s horror comedy Bhoot Police is streaming on Disney+ Hotstar. The film has opened to mixed responses from the audience. While some think, Saif nailed it in his comic avatar, others found the climax predictable. Actress Malaika Arora seems to have enjoyed the film. She took to Instagram stories and shared a picture watching the film. Along with the picture, she wrote, “OMGGGG THIS WAS SOOOOO ENTERTAINING, SAIFU”. 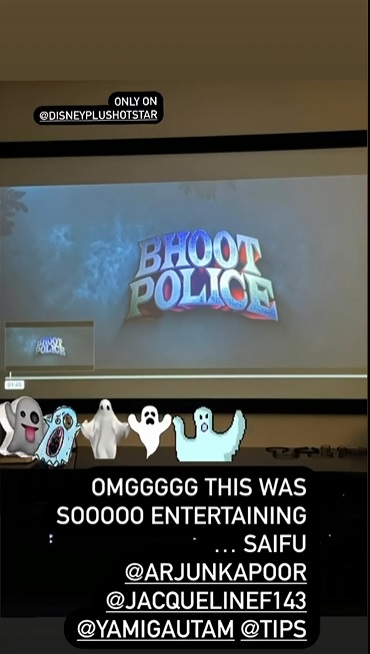 Pavan Kripalani’s horror comedy has Arjun Kapoor and Saif Ali Khan as ghost hunters. While Saif plays the role of a fake Baba Vibhooti who prefers to take alcohol and sex over catching ghosts. Arjun’s character Chiraunji goes by the book ‘Baba ki Kitab’ to ward off the supernatural forces. Jacqueline plays Kanika, and Yami plays Maya in the film.

The movie focuses on two brothers Vibhooti and Chiraunji as they travel in their van throughout the country hunting down and driving away Bhoots, Djinns, Daayans, Churails, and many more. Saif shares why he agreed to portray ‘Vibhooti’ in the movie.

He said: “I loved the script the first time I heard it, it was one of the most surprising entertaining scripts and very interesting character because of what he (the character Vibhooti) goes through”.

Saif added: “From being an unbeliever to believer and various things. I liked the way he dressed, the world he’s from, the accent he speaks in and completely irreverent person and slightly twisted person Vibhooti is, it’s an interesting character”.