Bigg Boss is one of the most-loved and talked about shows of the small screen. During this time, fans wait for an update related to the reality show which is hosted by superstar Salman Khan. However, looking at its popularity, the makers decided to go digital this time which is why Bigg Boss OTT was launched. The show, for the unversed, will run on the digital platform Voot for a period of six weeks and will be hosted by none other than Bollywood filmmaker Karan Johar. It will run with certain changes on the web after which it will move on to its original format. Soon after its announcement, fans went gaga and soon everyone started talking about the list of contestants.

Till now, two celebrities– singer Neha Bhasin and ‘KumKum Bhagya’ fame Zeeshan Khan have been confirmed. Meanwhile, there are reports that model and VJ Anusha Dandekar might step into the house as a participant. There was no confirmation about the same until today when she took to Instagram and shared a video on her story and said, “Hey, everyone I just wanna come here and tell you all that I am not going on Bigg Boss and I never was. And I don’t know why they keep writing about it. And I just wanna tell you here have a great day.” 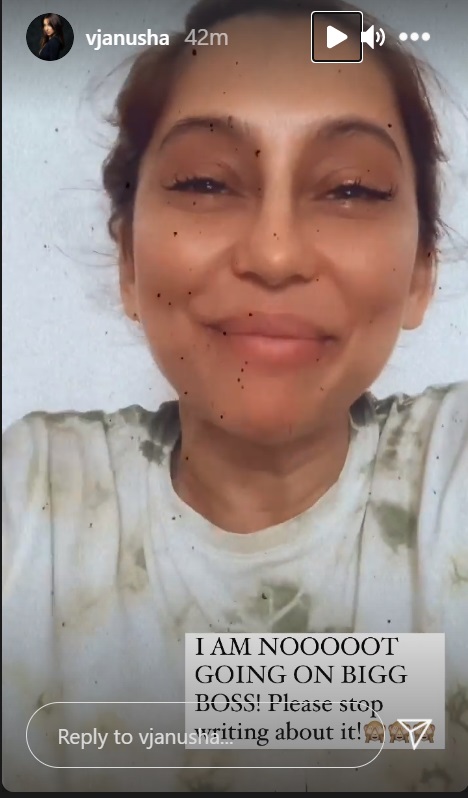 A few days back it came to light that her boyfriend Jason Shah removed all of their pictures from social media. It was being said that Jason took such a step in order to keep their relationship low profile. Well now, the clarification from the actress has finally cleared the confusion.

A similar incident happened wirh actress Ankita Lokhande who was also believed to be a contestant in the show. She shared a post and said, “It has come to my notice that certain sections of media have been speculating that I will be participating in Bigg Boss this year. I would like them and everyone at large to know and make a note that I am not going to be a part of the show. The rumours of my participation are baseless. People have been too quick to send me their hatred for something I am not even part off.”

Coming back to the show, it will be starting from August 8 on Voot. The USP is that for the first time the audience will have 24×7 LIVE access to enjoy the direct and deeper engagement, connection, and indulgence in the comings and goings of the house through just a click. Moreover, this exclusivity continues for the next six weeks, before the show goes on air, on Television.

Speaking about Anusha, she will also be seen judging ‘Supermodel Of The Year 2’ alongside actress Malaika Arora and Milind Soman. Speaking about the same, she said, “It can be a powerful way to feel inspired and present the most authentic version of yourself. The best thing about fashion and beauty is that you can express yourself through your style and personality regardless of where you come from, and we strive to follow the same mantra with ‘Supermodel of the Year.”