Bollywood actress Dia Mirza treated her fans with the first glimpse of her son Avyaan Azaad Rekhi on the occasion of World Elephant Day. The little munchkin can be seen wearing a cute onesie with elephant print on it. Sharing the photo, Dia wrote, “We are celebrating #WorldElephantDay (sic),” followed by earth, elephant and sun emojis. 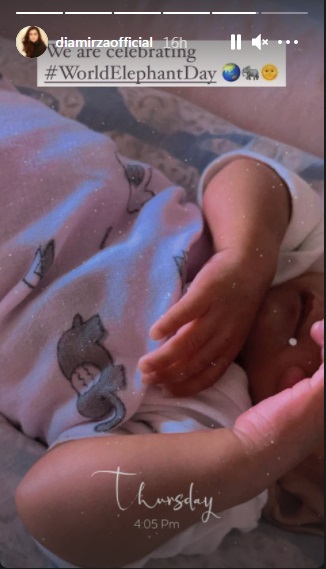 Dia welcomed son Avyaan with Vaibhav Rekhi on May 14. However, the couple announced that they had been blessed with a son on Instagram two months later. She revealed that Avyaan was prematurely born. Paraphrasing an Elizabeth Stone quote, Dia wrote, “To have a child is to decide forever to have your heart go walking around outside your body (sic).”

The actress had announced her pregnancy in April writing, “Blessed to be…One with Mother Earth…One with the Life Force that is the beginning of everything…Of all stories. Lullabies. Songs. Of new saplings. And the blossoming of hope. Blessed to cradle this purest of all dreams in my womb.”

Dia married Mumbai-based businessman Vaibhav Rekhi in February 2021. This is Dia’s her second marriage. She was earlier married to Sahil Sangha, who was also her business partner. Her wedding was an intimate affair which was attended by very close freinds and family.

Also read: Raashii Khanna consoles Shahid Kapoor on sets of Raj & DK’s next, but why?