Hamas sent a heavy barrage of rockets deep into Israel on Thursday as Israel pounded Gaza with more airstrikes and called up 9,000 more reservists. The relentless escalation of hostilities came even as Egyptian negotiators held in-person talks with the two sides, intensifying efforts at mediation.

Previous fighting between Israel and Gaza’s Hamas rulers, including a devastating 2014 war, was largely confined to the impoverished and blockaded Palestinian territory and Israeli communities on the frontier. But this round seems to be rippling farther and wider than at any time since the 2000 Palestinian intifada, or uprising.

While some rocket attacks have reached the Tel Aviv area, Arab and Jewish mobs have rampaged through the streets, savagely beating people and torching cars. Flights have been canceled or diverted away from the country’s main airport.

Weary Palestinians, meanwhile, somberly marked the end of the Muslim holy month of Ramadan on Thursday as militants fired one barrage of rockets after another and Israel carried out waves of bone-rattling airstrikes. Since the rockets began Monday, Israel has toppled three high-rise buildings that it said housed Hamas facilities after warning civilians to evacuate.

Gaza’s Health Ministry said the death toll has climbed to 87 Palestinians, including 18 children and eight women, with 530 people wounded. Islamic Jihad confirmed the deaths of seven militants, while Hamas has acknowledged 13 of its militants killed, including a senior commander. Israel says the number of militants dead is much higher. 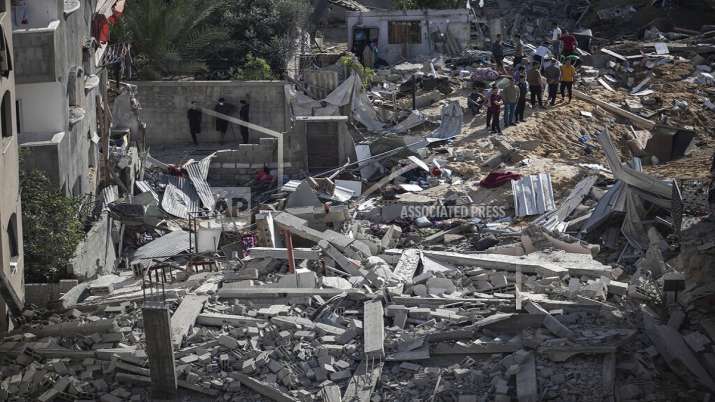 Seven people have been killed in Israel. Among them were a soldier killed by an anti-tank missile and a 6-year-old child hit in a rocket attack.

Many world leaders have condemned the violence and urged restraint, and a visit by Egyptian security officials was a significant development in international efforts to bring about a cease-fire; such efforts have been key to ending past rounds of fighting.

The officials met first with Hamas leaders in Gaza before holding talks with the Israelis in Tel Aviv, two Egyptian intelligence officials said. They spoke on condition of anonymity because they were not authorized to talk to the press.

Still, both Israel and Hamas seemed determined to press ahead.

Even as word came of the mediators’ presence, Gaza militants fired a volley of some 100 rockets nearly simultaneously, raising air raid sirens around southern and central Israel.

There were no immediate reports of damage or casualties — but the barrage appeared aimed at demonstrating that Hamas’ arsenal was still full even after three nights of airstrikes and the killing Wednesday of several Hamas leaders involved in the rocket program. 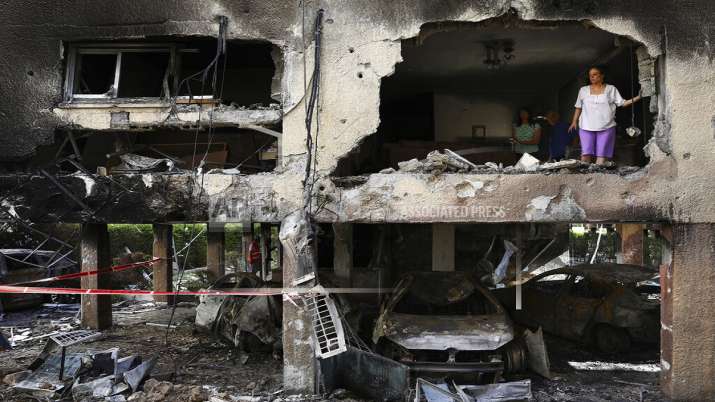 “The decision to bomb Tel Aviv, Dimona and Jerusalem is easier for us than drinking water,” a spokesman for Hamas’ military wing declared in a video message. Dimona is the site of Israel’s nuclear reactor.

In another sign fighting could escalate further, Israel’s defense minister approved the mobilization of 9,000 more reservist troops, and Israel’s military spokesman said forces were massing on the border with the Gaza Strip.

The Defense Ministry said Thursday that the latest mobilization approved by Defense Minister Benny Gantz was an “exceptional call-up.”

The military’s chief spokesman, Brig. Gen. Hidai Zilberman, said forces were “preparing the option of a ground maneuver.” He told Israeli public television station Kan that tanks, armored personnel carriers and artillery were being readied “for this option for mobilization at any given moment.” 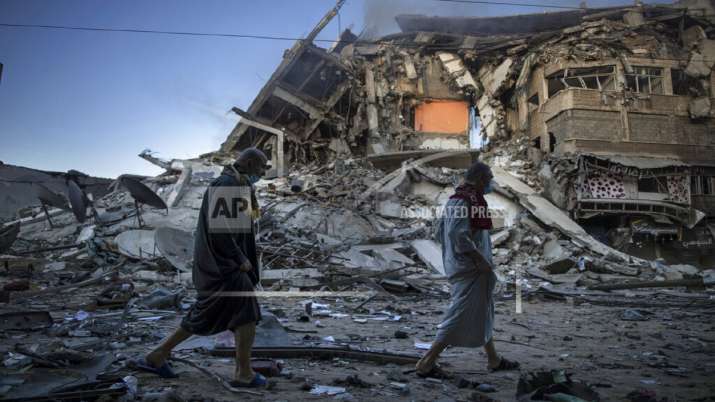 But the level of forces was not believed to be strong enough yet for a possible ground invasion.

Israeli Prime Minister Benjamin Netanyahu visited batteries of the Iron Dome missile defense system, which the military says has intercepted 90% of the 1,200 rockets that have reached Israel from Gaza so far.

“It will take more time, but, we will achieve our goal- to restore peace to the State of Israel,” he said.

The previous evening, Israeli TV reported Netanyahu’s Security Cabinet authorized a widening of the offensive that the military says has already hit 600 targets in Gaza.

In Gaza, a pall was cast over Eid al-Fitr, the holiday at the end of Ramadan’s month of daily fasting. It is usually a festive time when families shop for new clothes and gather for large feasts.

Instead, Hamas urged the faithful to mark communal Eid prayers inside their homes or the nearest mosques instead of out in the open, as is traditional.

Hassan Abu Shaaban tried to lighten the mood by passing out candy to passers-by after prayers, but acknowledged “there is no atmosphere for Eid at all.”

“It is all airstrikes, destruction and devastation,” he said. “May God help everyone.”

In Gaza’s southern town of Khan Younis, dozens of mourners marched through the streets carrying the bodies of an 11-year-old and a 13-year-old killed when an Israeli airstrike hit near their home Wednesday.

In Israel, rocket fire brought life to a standstill in southern communities near Gaza, but also reached as far north as the Tel Aviv area, about 70 kilometers (45 miles) away, for a second straight day.

Israel diverted some incoming flights from Ben Gurion International Airport, near the city, to the Ramon airfield in the country’s far south, the Transportation Ministry said. Several flights have also been cancelled.

Hamas said it fired its most powerful rocket, the Ayyash, toward Ramon, 180 kilometers (110 miles) from Gaza. The rocket landed in a desert area, and no air raid sirens sounded, Israeli media reported. Still, flights were briefly suspended at the airport, with several planes left circling before landings and takeoffs were resumed, according to tracking websites.

“We’re coping, sitting at home, hoping it will be OK,” said Motti Haim, a resident of the central town of Beer Yaakov and father of two children. “It’s not simple running to the shelter. It’s not easy with the kids.”

UN Secretary-General Antonio Guterres condemned the “indiscriminate launching of rockets” from civilian areas in Gaza toward Israeli population centers, but he also urged Israel to show “maximum restraint.” U.S. President Joe Biden called Netanyahu to support Israel’s right to defend itself, and Secretary of State Antony Blinken said he was sending a senior diplomat to the region. 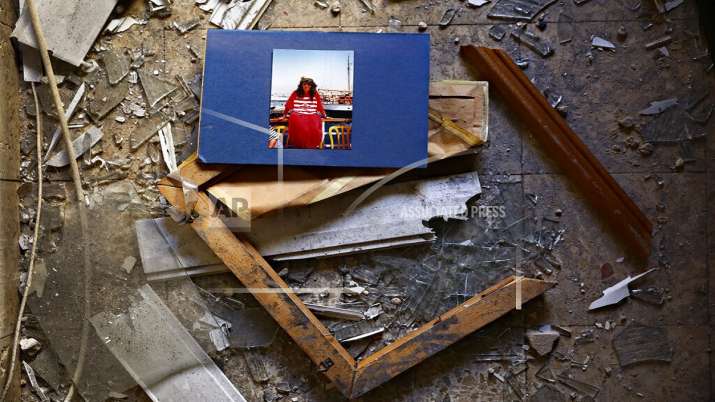 The current eruption of violence began a month ago in Jerusalem, where heavy-handed Israeli police tactics during Ramadan and the threatened eviction of dozens of Palestinian families by Jewish settlers ignited protests and clashes with police.

A focal point of clashes between Palestinians and Israeli police was Jerusalem’s Al-Aqsa Mosque, built on a hilltop compound that is revered by Jews and Muslims.

Israel regards Jerusalem in its entirety as its capital, while the Palestinians want east Jerusalem to be the capital of their future state.

The recent fighting has also set off violent clashes between Arabs and Jews in Israel, in scenes unseen in more than two decades. Netanyahu warned that he was prepared to use an “iron fist if necessary” to calm the violence.

Ugly confrontations erupted again late Wednesday. Jewish and Arab mobs battled in the central city of Lod, the epicenter of the troubles, despite a state of emergency and nighttime curfew. In nearby Bat Yam, Jewish nationalists dragged an Arab motorist from his car and beat him until he was motionless.

Israeli police said two people were shot and wounded in Lod and an Israeli Jew was stabbed. An Arab citizen was stabbed and seriously wounded in Jerusalem’s central Mahane Yehuda market.

In the occupied West Bank, the Israeli military said it intervened in a Palestinian shooting attack that wounded two people. The Palestinian Health Ministry said the suspected gunman was killed.

Still unclear is how the fighting in Gaza will affect Netanyahu’s political future. He failed to form a government coalition after inconclusive parliamentary elections in March, and now his political rivals have three weeks to try to form one.

They have courted a small Islamist Arab party, but the fighting could hamper those efforts.