As Kannada star Sudeep Kichcha turned 48 on Thursday, the film industry chipped in with their wishes for the actor on his special day. A slew of celebrities including Jacqueline Fernandez, Riteish Deshmukh, Suniel Shetty, Nirup Bhandari and Kabir Duhan Singh and more took to their respective social media handles and wished the ‘Makkhi’ star. Taking to her Instagram Story, Jacqueline posted a birthday wish for her upcoming ‘Vikrant Rona’ co-star. “Love Always!!! @kichchasudeepa,” she wrote.

Actor Riteish Deshmukh posted an artwork of Sudeep’s portrait on his Instagram Story along with the message,” Happy birthday my dearest friend @kichchasudeepa – May God shower upon you the best of health and world of happiness. Wishing you super successful year ahead – love you brother.” 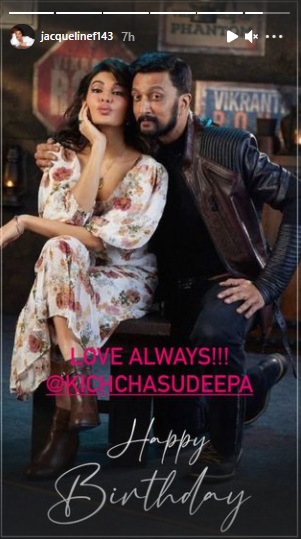 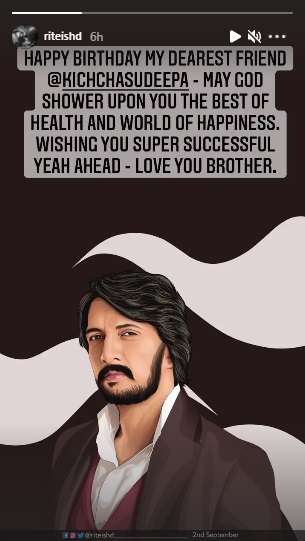 Suniel Shetty took to his Twitter handle to wish the ‘Dabangg 3’ actor. “A very very Happy Birthday to you @KicchaSudeep. May the coming year be blessed with lots of love, joy and prosperity,” he tweeted.

Actor Nirup Bhandari, who is also starring in ‘Vikrant Rona’, took to his Instagram handle and posted a picture in which he can be seen posing along with the birthday star. “Happy birthday @kichchasudeepa sir. It’s an honour & an enriching experience to share screen space with you. Can’t wait for the world to witness #vikrantrona #hbdkicchasudeep,” he captioned the post.

Model turned actor Kabir Duhan Singh posted a birthday wish on his Twitter handle by sharing a behind-the-scenes clip from the shooting of their film ‘Pailwaan’ (2019). “Happy Birthday @KicchaSudeep sir. wishing you happiness always,” he added.

Makers of the film ‘Vikrant Rona’ released the first glimpse of the song ‘Dead Man’s Anthem’ on Sudeep’s birthday. Written and directed by Anup Bhandari, reports suggest Jacqueline will feature in an extended cameo appearance in the film, while Nirup Bhandari and debutante Neetha Ashok will star in the lead roles. The movie is reportedly produced by Shalini Manjunath and Jack Manjunath and co-produced by Alankar Pandian under the banners of Shalini Arts, and Invenio Films India.