By 9 pm ET last night, Nick Sawhney knew he was in trouble.

Just a half hour earlier, still steeped in the afterglow of Joe Biden’s inauguration, Sawhney had pushed live a website that lets you put a viral image of Bernie Sanders—seated, mittened, alone—atop any Google Street View image. The meme had already reached a fever pitch, with the Photoshop faithful placing the Vermont senator in everything from Mortal Kombat to Nighthawks at the Diner. But Sawhney’s creation, born out of a group chat with friends, added layers of personalization, ease of use, and absurdity; because it fixes Sanders in the same coordinates regardless of his location, he occasionally looks as though he’s floating, or sitting on a car, or in an otherwise unlikely orientation.

The site gained traction on Twitter slowly at first; friends retweeting, then friends of friends. A few verified accounts joined in. And then, as wonderful and perfectly timed internet creations do, it snowballed.

Bernie near the Golden Gate Bridge.

By 9 pm ET, he had already blown through the free tier offered by Heroku, the cloud platform that Sawhney is using to host the site. At 9:27 pm, as the requests piled up, he tweeted, “oh god oh fuck google dot com how to scale heroku app quickly.” A Heroku employee happened to see it; within an hour Sawhney was on a video call with one of the company’s engineers, figuring out how to keep his hastily constructed ship afloat.

“If I had known this was going to be the traffic, I would have made every single decision completely differently,” says Sawhney. “When it blew up I realized that a website is more than just writing the code and putting it on there.” 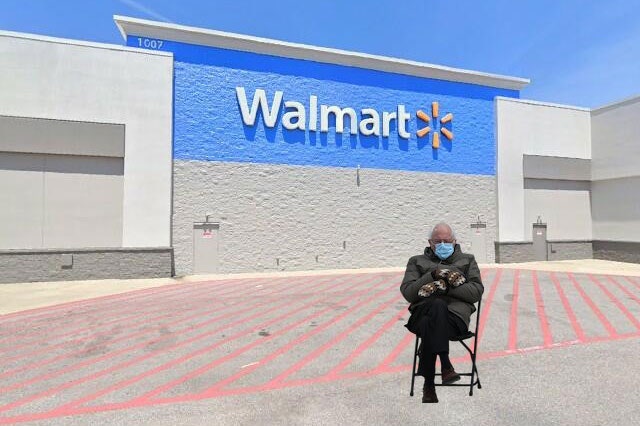 In fairness, that the site was thrown together on a whim adds to its charm. It’s not flashy, and it delivers precisely what it promises: pictures of Sanders anywhere in the world that Google’s Street View cars have roamed. To create it, Sawhney simply tapped into the Google Maps API, created a text entry field for queries, and decided where specifically the senator should pop up in the returned location images.

“Generally the Street View API will give you a relatively similar angle from the sidewalk, unless they couldn’t get that angle,” Sawhney says. “So if I don’t try to change that field of view or the angle, and generally know what Bernie will look like on the sidewalk, it works most of the time.”

That choice, too, was admittedly born out of haste, but Sawhney says he appreciates the simplicity; you can imagine a version of the site that allows you to move Sanders around the scene, rotate him and such. That all adds up to extra work for visitors, though. The less friction, the faster the searches, and the better the memes. 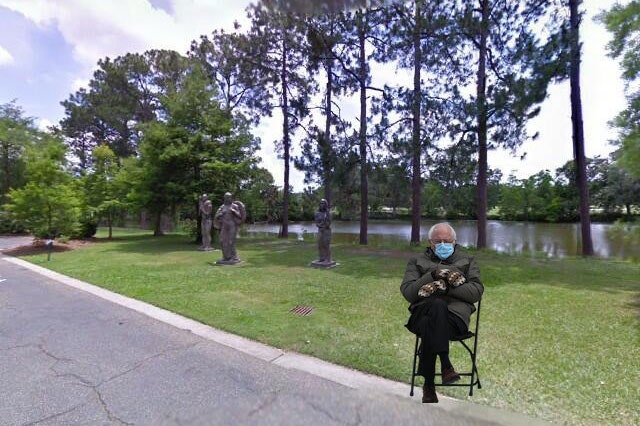 Bernie at the park.

Also the more expensive, from Sawhney’s point of view. Every time someone makes a request on his site, Google charges him a small amount to return the appropriate image. When the visitors are mostly his friends and small Twitter circle, that’s one thing. But throughout the night, his site averaged between 22 and 32 requests per second. By Thursday afternoon, that had spiked to around 70 requests per second. The bill for the API calls alone is closing in on $2,000; the server space required to keep the site functional and online tacks on another several hundred for the month. 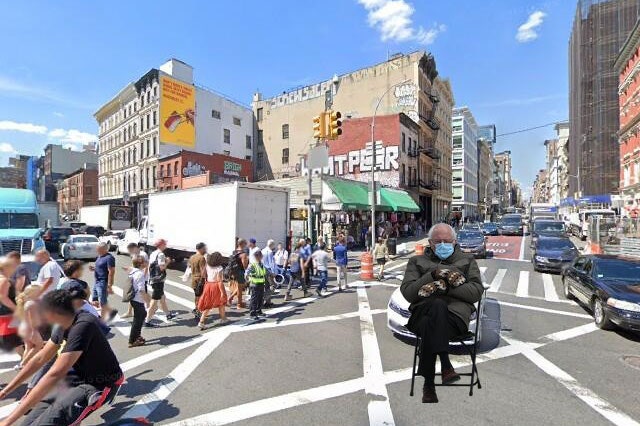 Bernie in the intersection.

To be clear, Sawhney’s not complaining. “This is an awesome situation to be in,” he says. “It’s been really wild trying to keep this thing going.” Early into the traffic surge, a friend recommended crowdfunding; more than 750 people have contributed to his Buy Me a Coffee page. Heroku has thrown in some monitoring services gratis to help keep things stable. Sawhney says he has enough cash on hand to keep the site alive for another week after this, assuming interest starts to die down. (It’s the internet; it’ll move on soon if it hasn’t already.)

Until then, the site will continue to improve; Sawhney made the code open source, and has already gotten pull requests that help make the site a little faster, look a little better. “This is definitely some of the least amount of effort I’ve put into a project,” he says. It’s proof that the most impactful ideas don’t have to be the flashiest; fitting for a meme with Bernie Sanders at its center.

Trump to GOP: Support candidates who 'stand for our values'