Director Ram Madhavani penned a heartwarming note on Thursday for Bollywood actor Kartik Aaryan. The actor recently announced that his upcoming film “Dhamaka” will be heading to the streaming platform Netflix. The Madhvani-directed thriller will see Aaryan play a journalist named Arjun Pathak, who covers the live broadcast of a terror attack in Mumbai. Now, after receiving an overwhelming response from the audience on the teaser, Madhavani has a special message for Kartik, to which the actor shared a quirky reply or rather funnily threatened the director.

As the teaser of Kartik Aaryan’s ‘Dhamaka’ released recently, the internet is raving about the intense performance of the actor, pouring appreciation for the film. Expressing his fondness for the lead actor of the film, Madhavani wrote a heartwarming note on social media.

Taking to his Instagram Story, Madhavani wrote, “Kartik Aaryan gave his all to my way of working which I call the 360-degree system. His involvement, passion and precise calibration as an actor is something I hugely respect. He makes the work better. It would be great to collaborate with him again.”

Replying to the director, Kartik said, “Of course we are working together again Sir sochna bhi mat kisi aur ke saath kaam karne ki.” The actor used the ‘laughing out loud emoji’ along with the caption. 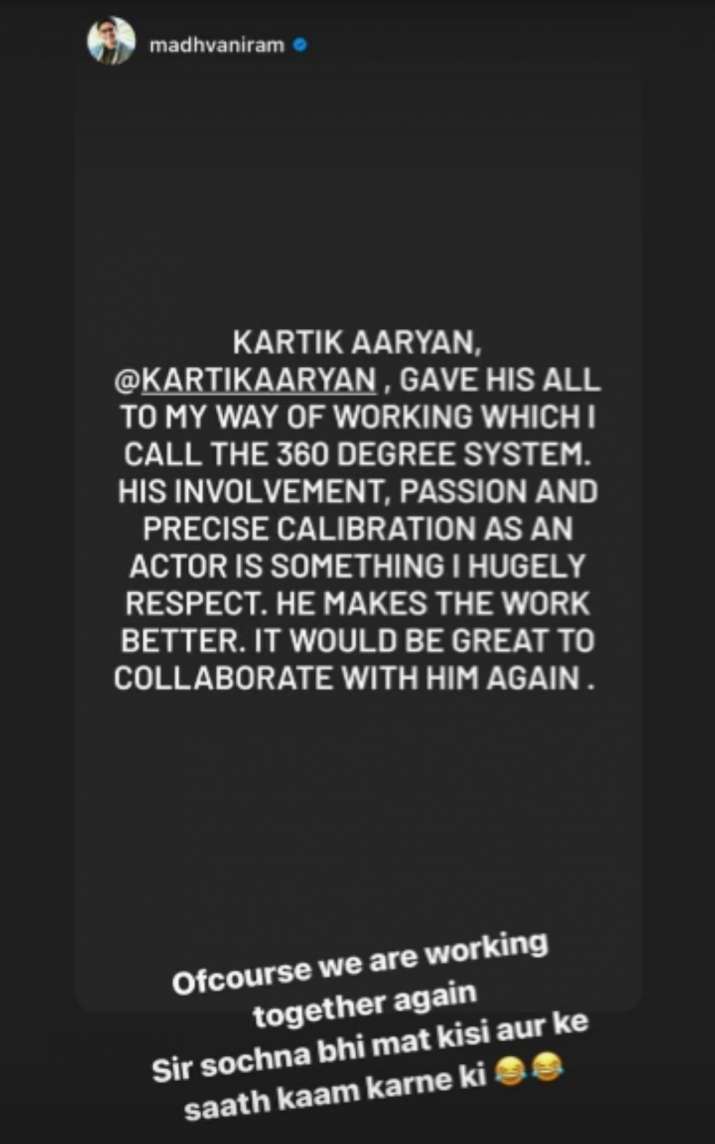 “Dhamaka” gives a bird’s eye view into the workings of a news channel in the 21st Century. It also stars “Super 30” actor Mrunal Thakur and “Sacred Games” star Amruta Subhash.

On the related note, Aaryan took to Instagram to the share teaser of the film, slated to be released this summer. “Main hoon #ArjunPathak. Jo bhi Kahunga Sach Kahunga (I am Arjun Pathak. I will speak the truth and nothing but the truth). #Dhamaka Coming soon, only on Netflix,” he captioned the post.