Playback singer Rahul Vaidya on Thursday said his Facebook account has been hacked. The ex-Bigg Boss 14 contestant shared the news on Instagram and warned fans to ignore posts from his Facebook account. “Hello everyone.. My Facebook page has been hacked. Pls ignore All the random videos posted by the hacker. Trying to get it back asap. @facebook @facebookapp,” wrote the 33-year-old singer on his Instagram Stories. For those unversed, Rahul is these days prepping for his stint in the upcoming reality show Khatron Ke Khiladi 11 hosted by Bollywood filmmaker Rohit Shetty. He along with other participants will fly to Cape Town where the shooting of this season will take place. 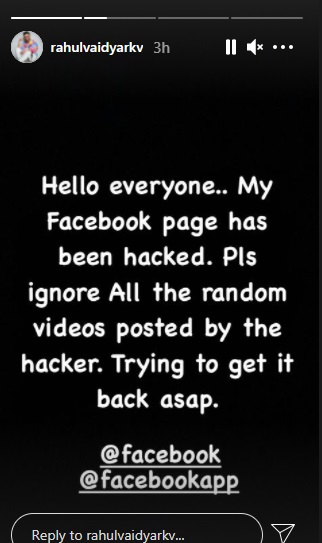 The singer previously denied doing the stunt-based show owing to his marriage plans with girlfriend and actress Disha Parmar. However, the present COVID condition forced the couple to postpone their wedding. It is after this decision that he nodded yes to the show.

Apparently, Rahul is being touted as the highest-paid celebrity on Khatron Ke Khiladi 11.

Vaidya was first noticed when he featured as a contestant on popular singing show “Indian Idol”. He has tracks like “Be Intehaan”, “Tera Intezaar” and “Qabool Kar Le” to his credits.

He was recently seen in the music video ‘Madhanya’ alongside his girlfriend Disha Parmar. Watch the full song here: