Television’s most popular show Kumkum Bhagya will be clocking for 7 years on Thursday. Actress Sriti Jha who portrays the lead role of Pragya in the show reminisced some special moments and shared her post dated April 14, 2014, which marks the beginning of Kumkum Bhagya’s first-ever poster on her Instagram stories. She captioned the post, “7 years ago…” 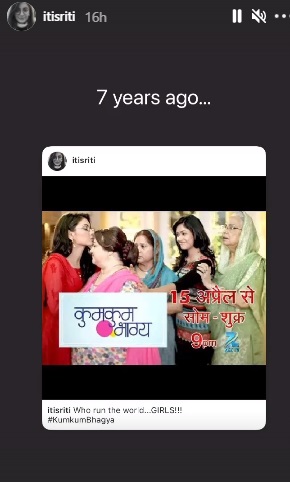 The show was released on television for the first time on April 15, 2014.

Sriti had posted this poster a year back on her social media. She captioned it then as “Who run the world…GIRLS!!! #KumkumBhagya.”

Many fans, followers, and well-wishers of Sriti dropped in their good wishes in the comments section.

For the unversed, Kumkum Bhagya is one of the most successful running shows in the history of television. It continues to rank high on the TRP charts. The show initially starred Sriti and Shabbir Ahluwalia in the lead roles but now has a few new additions of actors. It currently stars Mugdha Chaphekar, Krishna Kaul, Pooja Banerjee, Reyhana Pandit, Vin Rana, Leena Jumani in the major role and many others in the supporting roles.