TV star Kylie Jenner recently faced backlash by social media users for asking her followers to support a crowdfunding campaign for her makeup artist. According to Fox News, the 23-year-old businesswoman reportedly shared an Instagram Story on Thursday that urged her fans to donate to a GoFundMe set up by the family of Samuel Rauda, a celebrity makeup artist who has worked with the Kylie Cosmetics founder. Rauda was in an accident that required “major surgery” on Sunday, March 14, according to the GoFundMe page.

The ‘Kylie Cosmetics’ founder shared a still shot from Rauda’s most recent video along with the link to the crowdfunding website to encourage her followers to donate. “May God watch over you and protect you @makeupbysamuel everyone take a moment to say a prayer for Sam who got into an accident this past weekend,” Jenner wrote in her Instagram Story (via Newsweek). “And swipe up to visit his families [sic] go fund me.”

The GoFundMe’s original monetary goal was set at USD 6,000, but the goal has incrementally gone up as the Rauda family has received more donations from generous supporters. As of Sunday, the campaign’s new goal is USD 120,000. More than USD 99,200 has since been raised. As reported by Fox News, Jenner donated USD 5,000 to the GoFundMe as did actor Bella Thorne, who is also a celebrity client of Rauda’s. Sofia Richie, Bleta ‘BeBe’ Rexha and Huda Kattan, according to the website’s top donations filter, also join the list of other generous stars and beauty insiders who have donated thousands of dollars.

However, online critics zeroed on Jenner for her former billionaire designation by Forbes. Although the business news outlet rescinded the beauty mogul’s 10-figure net worth in May, social media users were still quick to say they think her donation was too small. “Kylie Jenner, who makes USD 19K/hr asking for $$$ from her fans to help her make up artist pay for a USD 60,000 surgery, is an excellent example of why we need universal healthcare. Even billionaire employers like Kylie and Walmart aren’t willing to pay for their employees’ healthcare,” NYC-based community activist Moumita Ahmed tweeted out Sunday morning.

Kylie took to Instagram to issue a clarification and wrote, “I feel it’s important for me to clear up this false narrative that I’ve asked fans for money and am not paying for my makeup artist’s medical bills. Sam isn’t my makeup artist and unfortunately, we don’t have a personal relationship anymore but I have worked with him a few years ago and think he’s the sweetest.” Kylie said that she immediately called her current makeup artist and friend Ariel when she saw her post about Sam’s accident and his family’s GoFundMe. “After learning in more detail about the accident it compelled me to visit his gofundme which was set at 10K. They had already raised $6K so I put in $5K to reach their original goal and thought I’d post on my stories to gain more awareness if anyone felt so compelled to share or donate.” 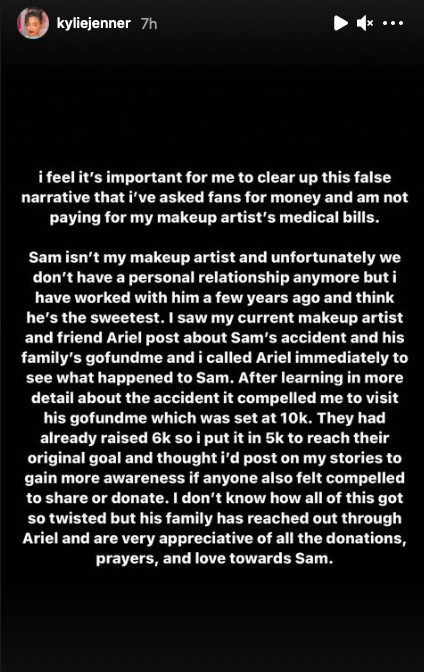 Writer Charlotte Clymer alleged Jenner’s donation is “buying a premium latte” for someone who has a net worth of USD 900 million. “Folks are defending Kylie Jenner by pointing out she donated USD 5,000 to her makeup artist’s medical GoFundMe. Her net worth is USD 900M. So, that’s 0.000006 per cent of her net worth. If your net worth were, say, USD100k, it would be like donating 56 cents,” Clymer wrote.

“Her makeup artist apparently needs USD 60k. Kylie Jenner paying that would be like someone with USD 100k net worth sparing USD 6.72 to pay off a friend’s medical bills,” added the writer. Per Fox News, other social media users criticised Jenner for her lavish spending on material items, parties and vacations for herself, her 3-year-old daughter Stormi Webster and Kardashian-Jenner family members.

While Jenner is extremely wealthy, an exact measure of her income and net worth are not known since the star has not made that information available to the public.