Veteran Bollywood actor Amitabh Bachchan‘s granddaughter has been very active on social media, raising her voice about gender equality and human rights. The diva on Wednesday reacted to Uttarakhand Chief Minister Tirath Singh Rawat’s comment on ripped jeans and said that he needs to change his mentality. The CM claimed that by wearing ripped jeans, the women are not sending the right message. He said his while attending a workshop organized in Dehradun. Opposing the statement, Navya shared a picture of herself in ripped jeans.

Navya wrote on her Instagram stories, “Wtf.. Change your mentality before changing our clothes 🙂 because the only thing shocking here is the message comments like this send to society. Just (angry emojis).” In another story, she wrote, “…..and you can? I’ll wear my ripped jeans. Thank you. And I’ll wear them proudly :).” 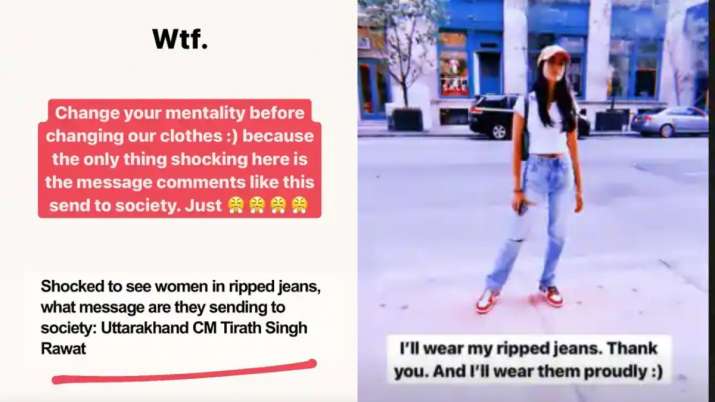 Meanwhile, Tirath Singh Rawat said, “Showing bare knees by wearing ripped jeans just to look like rich kids is the value given now which is just a race towards westernisation when the Western world today is following us. Ripped jeans pave the way for societal breakdown and is a bad example parents set for children.”

Navya keeps ruling the internet for her dating rumours with Jaaved Jaaferi’s son Meezaan Jaaferi. While the duo hasn’t confirmed their relationship but they have always been tagged together after pictures of them went viral on the internet. They have always been appreciative of each other’s work as well. Last year, when Navya turned an entrepreneur post her graduation, Meezaan had encouraged her and congratulated her for the new venture.

Recently, when Jaaved Jaaferi was asked about son Meezaan dating Navya, he said that they are just ‘good friends’ who have known each other from their school days. In an interview with The Times of India, Jaaved said, “People want content. Being good friends with somebody is considered to be something else always. These children have grown up together; my daughter and Navya have been friends since school.”

He added, “They have a common group of friends. Even Sara Ali Khan and Meezaan were in the same school. They used to come home, hang around till 3 am. It is convenient to link them up as they are always together.”

While Navya has no plans of joining Bollywood as an actress, Meezaan made his acting debut in 2019 with Sanjay Leela Bhansali’s Malaal. The film is a remake of the Tamil film 7G Rainbow Colony. He will be next seen in Hungama 2 with Shilpa Shetty and Paresh Rawal.