Bollywood celebrities like Shah Rukh Khan and his wife Gauri, Kareena Kapoor Khan, Karan Johar, Malaika and Amrita Arora, Manish Malhotra, Natasha Poonawalla and others came together on Sunday for a get-together. The actors took to Instagram to share photos from the party. Sharing a moment to togetherness, Amrita wrote, “Sunday night with my peeps.” Karisma shared the same picture on her Instagram and said, “A perfect Sunday evening.”

Karan Johar also shared the same picture on Instagram stories and said, “This is Us!” The actors shared more selfies from the evening amnd gave  asneak peek intoi all the fun they had together. 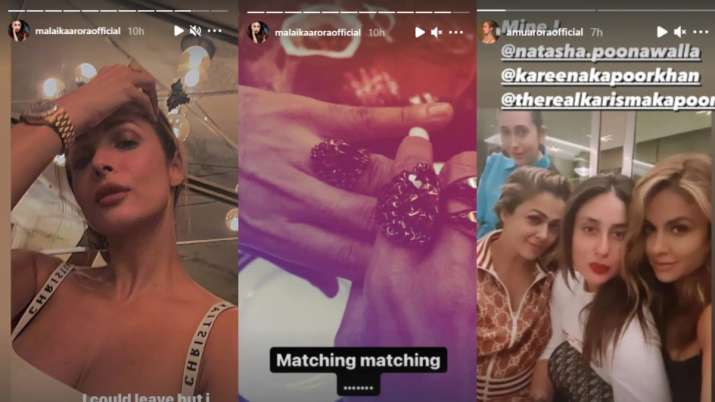 The photos of the Sunday party popped up soon after Karan Johar launched the reality show BIgg Boss OTT. The ace filmmaker and host of Bigg Boss OTT made his entry to the beats of dhol-taasha and shaking a leg to hits like ‘It’s The Time to Disco’, ‘Radha’ and ‘Shawa Shawa’ from his productions. He also gave a house tour in true ‘Kyunki Saas Bhi Kabhie Bahu Thi’ style.

After the OTT (Over The Top) performance, the sassy and witty host Karan Johar introduced the 6 desi boys to the audience and then 6 girls.

This year, the contestants have entered the show by making connections and will go forward accordingly. Also, Malaika Arora literally set the stage ablaze with her sizzling moves to the racy Param Sundari number. Later, the gorgeous actress also turned mentor for the male contestants and guided them in diverse activities from yoga to dance and also taught them to be ‘sarva gunn sampann’.