While the team of ‘Shershaah’ awaits the release of the film, which is streaming from tomorrow, early reviews for the biopic have applauded the remarkable performances of the cast. Flooding social media with praises, industry friends and critics showered their love on Sidharth Malhotra and Kiara Advani.

Receiving a special compliment from her upcoming co-star Vicky Kaushal, Kiara’s emotional performance has found its way into the audience’s hearts. Kaushal took to Instagram Stories and shared how much he loved the movie. He wrote, “Loved the Film. The valour and sacrifice of Capt. Batra had me in tears. Salute to all the bravehearts. Kudos to the entire team of #Shershaah #VishnuVardhan @karanjohar @sidhmalhotra you have had a long journey with the FIlm and it’s all so worth it. You are absolutely smashing brother.” 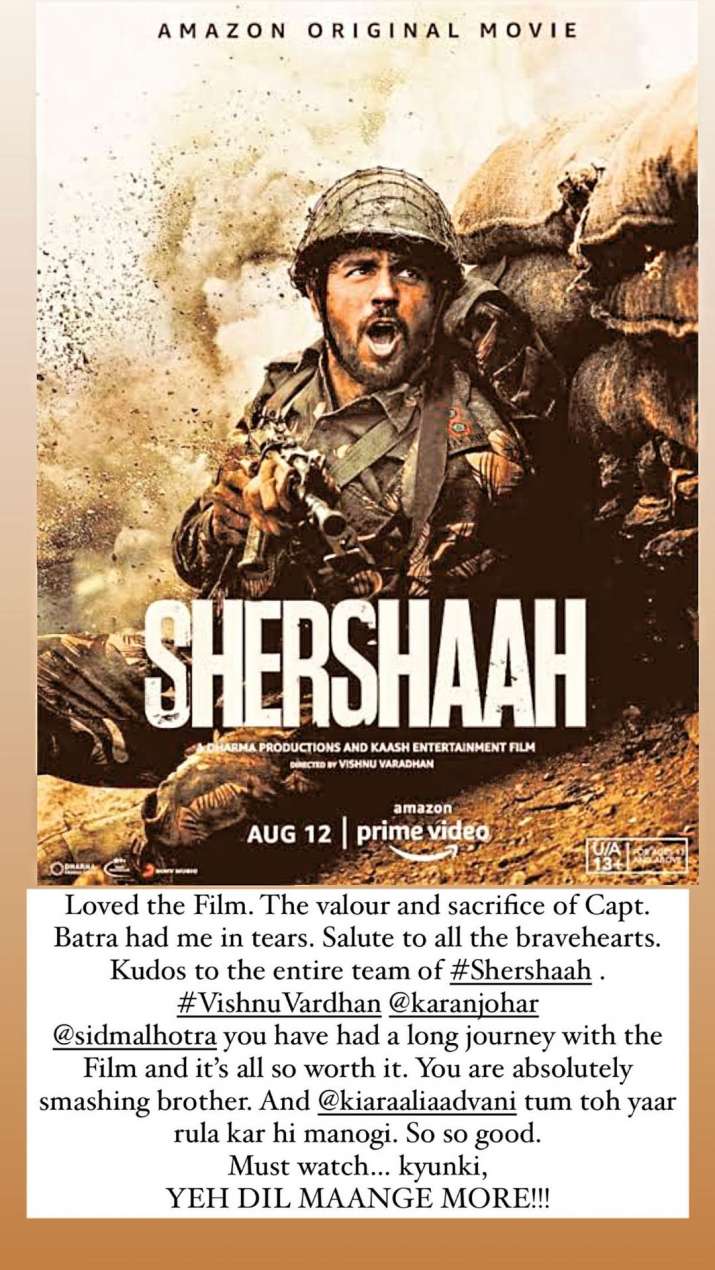 Replying to the same, Kiara said, “Big Hug Vicky” Recently, Kiara had revealed that her last scene in the film got the entire crew and unit teary eyed owing to the emotional quotient of the funeral sequence.

The biographical war drama, directed by noted south film director Vishnuvaradhan, narrates the life story of Captain Batra and how he led the charge of his troops during the 1999 Kargil war. He was given the highest wartime gallantry award Param Vir Chakra posthumously.

Juggling a busy schedule packed with back to back commitments, Kiara just returned from Delhi post ‘Shershaah’ promotions on Tuesday and immediately landed on the sets of her upcoming film ‘Bhool Bhulaiyaa 2’. She will also star in Shashank Khaitan’s next with ‘Jug Jugg Jeeyo’, and Shankar’s next co-starring opposite Ram Charan.

Beginning Wednesday with a brand event alongside Aamir Khan, the actor has currently left for the shoot of Shashank Khaitan’s next.