As Bollywood star Suniel Shetty turned 60 on Wednesday, his daughter and actress Athiya Shetty, shared a heartwarming wish for her father, giving fans a peek into the beautiful relationship the two share. Athiya took to her Instagram handle and shared a childhood picture with her dad, along with a present-day photo with him. In the caption, she thanked her father ‘for the genes’.

The ‘Mubarakan’ actor wrote, “Happy 60th, Papa. You are the one I bare my soul to, the one who reads all my thoughts. No words could ever suffice to express my love for you. You have given us the best things in life–your time, your love and your constant care. Thank you for leading by example and supporting us unconditionally. I love you with all my heart. PS: thank you for the genes.” The first photo showed the father-daughter duo at a recent shoot, whereas the second one was a walk down memory lane. It showed little Athiya wearing a sunglass, while Suniel holds her up with his hands.

Athiya’s post received several hearts and birthday wishes from her Instafam, but the comment that caught everyone’s eye was the one from her father, who wrote, “Forever.” Suniel’s son Ahan Shetty, who is all set to make his big Bollywood debut with ‘Tadap’, opposite Tara Sutaria, also wished his father on the special day by posting a series of throwback pictures with him on Instagram stories. In one of the photos, Ahan wrote, ”Happy 60th Birthday Papa.” 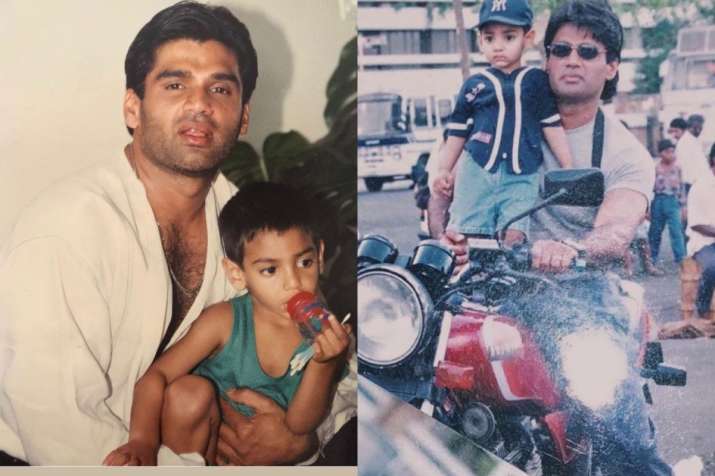 On the work front Athiya, who made her debut in Bollywood in 2015 with ‘Hero’, was last seen in ‘Motichoor Chaknachoor’ with Nawazuddin Siddiqui. Ahan’s upcoming debut with Sajid Nadiadwala is an addition to the legacy as Suniel too was launched by the producer. Penned by Rajat Arora with the film’s soulful music by Pritam, ‘Tadap’ will hit big screens on September 24, 2021.